A 26-year-old Holywood man who claimed he had wandered onto the grounds of a Newtownards farm by accident has been convicted of attempting to steal diesel.

At Ards Magistrate’s Court on Tuesday (May 22), Mitchell Donald Simpson – of Kinnegar Avenue, Holywood, Co. Down – contested the charge he attempted to steal diesel oil belonging to John Miliken, on June 3, last year.

Miliken – who has a family farm at Tullynagardy Road – told the court that at around 1:30pm on the day in question, he was with contracted workers cutting silage in one of his fields.

He said he was heading back to his farm house when he saw a black Transit van heading up his private lane.

Miliken followed it in his JCB at a distance, through a main yard, and into a second top yard – where he observed a man he did not know holding the nozzle of a farmyard diesel tank pump, pointing towards his black van.

The farmer told the court that the man saw he was being observed, then got into his van, and attempted to drive out.

Miliken said after “a cat and mouse game” he managed to drive the JCB into a position to block the van’s exit. He said he then rang police, who arrived and arrested Simpson. Miliken said the intruder pleaded with him not to ring police.

Simpson told the court that he was driving around the Craigantlet hills with a friend, and came to heavy traffic around the quarry.

He said his friend knew a shortcut into Newtownards, and he followed instructions – but he took a “wrong turn”, and found himself in a narrow country road where he couldn’t turn the van.

He said he went up a farm lane with the intent of turning the van in the yard; but, in the event, met a farmer – who blocked him in and castigated him for trying to steal diesel.

Simpson said: “Under no circumstances was I stealing diesel.”

He told the court: “I know I have dishonesty on my record but that was a while back.”

The prosecutor put it to him that in every question in his police interview that day he answered “no comment”.

Simpson replied there were issues surrounding an alleged firearm at the scene, and he was advised to make no comment.

Asked if the farmer was lying about what he saw, Simpson replied: “He seems like an honest good guy, but he’s mistaken about that.”

Then the prosecutor asked: “If you were so innocently lost, why did you not turn in the first yard when you could have done so? Instead you went further up the farm to a second yard.”

He replied: “To me there was one yard.”

The prosecutor retorted: “Are you saying Mr Miliken does not know his own property?”

Earlier the prosecutor had made a “bad character” application, asking the Crown to consider Simpson’s lengthy criminal record – which included dishonesty crimes.

In March 2016, he received a suspended prison sentence for attempting to sell a stolen iPhone back to its owner. With this crime he breached a licence period of a nine-month custodial sentence.

On Tuesday, his lawyer said nothing in his criminal record was “directly relevant” to the diesel matter.

District Judge Michael Ranaghan said he “didn’t place any weight on the bad character application”, but he found Miliken’s evidence to be “clear and cogent”.

He convicted Simpson, and adjourned the case to June 19 – pending the preparation of sentence-specific reports. 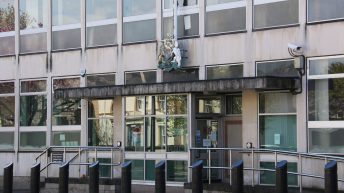