Finishing cattle off mixed-species grasslands alone in the UK 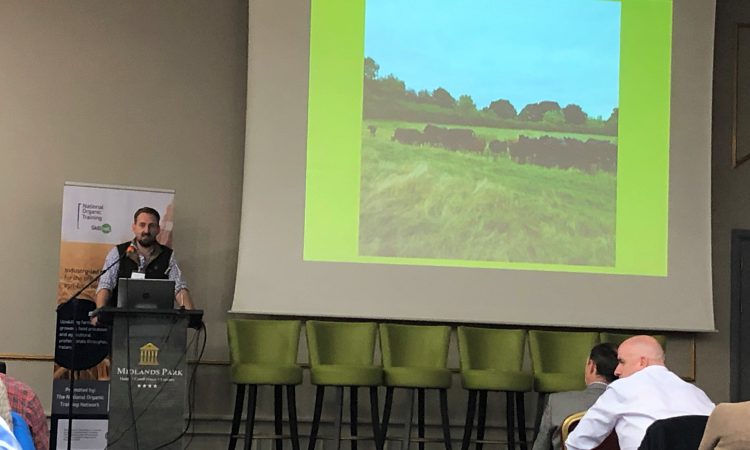 An organic farmer in the UK has been finishing cattle – at 28 months – off mixed-species grasslands alone, while also out-wintering his cattle each winter.

The farmer in question is Rob Havard, who spoke at the BioFarm 2019 event last week.

His herd consists of 60-pedigree Angus suckler cows plus followers. He also rears Angus bulls to be sold on as stock bulls. The average daily liveweight gain – of his herd – is 0.8kg/day with no meal being fed.

This system of farming, he feels, has allowed him to expand his family farm from 44ac to 455ac. He now rents a 180ac and a 190ac farm and has just taken on another 35ac of meadows.

The farm soil type is clay and the farm receives up to 30in of rain per year. However, this doesn’t stop him out-wintering his cattle each year, in which he has a unique approach.

A diversity of species

Rob has a diverse range of species in his grasslands which he thinks is “absolutely key to the quality of his soil”. The variety of species also attracts a number of different wildlife species to the area, including: owls; hares; and starlings.

He has created a diverse meadow mixture, by combining long-term traditional grasses such as meadow foxtail, smaller catstail and the finer leaved fescues, along with native clovers, trefoils and wildflower species.

His grassland contains up to 20 species and his meadows contain 200 plus species.

If one species stops growing – at a particular time of the year – another species takes over.

Meadow foxtail is an example of this, which, he noted, has very good early season growth, but stops growing in the month of May and doesn’t start growing again until the autumn.

“But, once meadow foxtail stops growing, different species take over – such as smooth stacked meadow grass, cocksfoot and tall fescue.

“While some of these aren’t the most palatable varieties, they have deep tap roots which can really transform your soil and get really good infiltration into the soil,” Rob said.

For a balance he also added deep-rooted herbs, such as plantain and chicory. Then for the dense and matted root system he has included varieties such as yarrow and red fescue.

Lots of different legumes have also started to appear in the paddocks, but he explained: “I don’t find bloat an issue as some of the other species contain natural tannins – such as the plantain – which help if there is a risk of bloat.

All the cows are out-wintered on the farm – with hay being the only supplementation fed.

“Many people come to me and say ‘well, I can’t out-winter because I am on clay soil’ and I say ‘well, we are on clay’. The reality is, you can change your soil structure and it doesn’t have to be difficult to manage.

“Our best field – which is also the most diverse – now has 16.8% organic matter, climbing from 14.7% three years previously.

I find once you go over about 12% organic matter it is actually really hard to poach it. Once you don’t keep the cows on it too long, it will come back really well.

“While there is some deterioration in the quality of the forage it is more or less the same,” he said.

The cows are given a fresh ‘bite’ every day or every second day; this, he said, was “instead of giving them a big paddock to graze for a couple of weeks”.

This makes a huge difference in terms of their body condition performance over the winter.

The on-target or overweight animals are grazed on a nature reserve where they are set stocked.

Movable water troughs are used to supply water to the cows to ensure that they are not going back over the same area twice and grazing the re-growths.

When there has been a lot of rain or snow, ‘bale pods’ – which are areas which contain a large number of bales – are used to hold the animals until it clears.

The bales are set out in the autumn, so that Rob can feed the cows without starting the tractor. These are then rolled out for the cows during the winter.

We have found bale rolling a great way to increase stocking rate on the farm.

“And, as our soils have become more resilient, we have been able to keep our cows out for longer over the winter.

“Initially, we kept them on a paddock for two days and then moved them on, and now we are looking at situations where we can keep them on for four days because we have the bales of hay as well.

“Whatever is leftover from the bale rolling is trampled into the ground, adding organic matter and diversity to the soil,” concluded Rob.