Milk production in the 23 major milk producing States during December totaled 16.8 billion pounds, up 2.4% from December 2015, the latest figures from the US Department of Agriculture (USDA) show.

Production per cow in the 23 major States averaged 1,931 pounds for December, 35 pounds above December 2015.

Overall, milk production in the US last year increased 1.9% on 2015 levels

The USDA has attributed higher milk prices, lower feed prices, lower cull cow prices, and attenuation of the drought in parts of California and other western areas to the increase in milk production.

For California (the State with the highest milk production), figures show that October was the first month since November 2014 with a year-over-year increase in milk production.

While the drought has become less severe parts of California, some eastern areas of the US have recently experienced drought, which could possibly limit the increase in US milk production to some extent.

The latest figures from Dairy Australia showing that for November production was down 6.3% compared to the same month last year.

These latest figures bring year-to-date production, which is from July in the case of Australia, is down 9.4% overall.

In November, some 934m litres of milk was produced in Australia, bringing the total volumes to date to 4,125.7m litres. 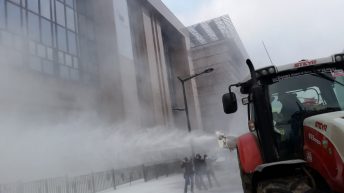