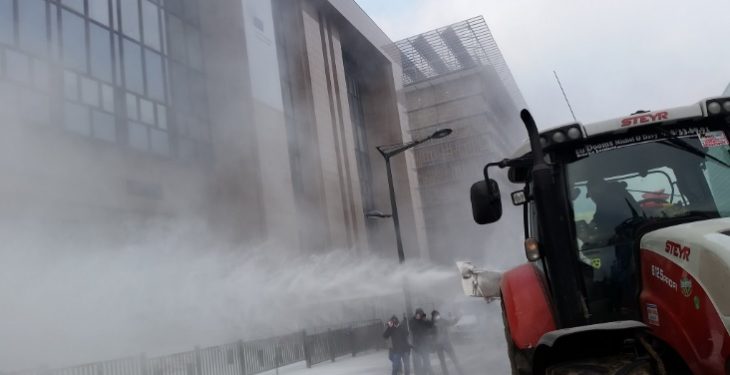 Dairy farmers who are members of the European Milk Board (EMB) are protesting today in Brussels to demand a permanent crisis instrument that prevents surpluses of milk powder on the dairy market.

Their protest is coinciding with the monthly meeting of EU agriculture ministers, which is taking place at European Council buildings in the Belgian city.

According to the EMB, the dairy market is still stuck in a crisis and while voluntary production cuts might have led to a rise in prices, it believes that the sale of milk powder from EU intervention stocks would, once again, put the market under pressure.

Ross Parker, who works in economic policy at the FTSE 100 firm, tweeted these photos of tractors with milk powder in Brussels.

Farmers protesting something by throwing milk powder around Brussels from tractors. pic.twitter.com/gO6bAyT7Mq

Marine Laouchez, a journalist with AFP in Brussels, tweeted several photos of the milk powder being sprayed on European Council buildings.

In a follow-up tweet, she tweeted a video of the protesters spraying milk powder on the buildings.

Reporter for the Financial Times Jim Brunsden tweeted that the EU Council was getting a “coating of milk powder” at today’s meeting of EU agriculture ministers.

The #EU Council gets a coating of milk powder. The protestors also have a tasty hot dog stand pic.twitter.com/4zpI1VvEEH

Meanwhile, at today’s meeting of agriculture ministers the Commission will update the Council on ongoing trade negotiations of relevance to agriculture.

Ministers will also have the opportunity to exchange views on the economic study of the cumulative impact of free trade agreements on EU agriculture.

Next the Council will be briefed on the current situation in the main agricultural markets, and on the implementation of the latest package of support measures.

In the context of this debate, the Commission will have the opportunity to present the result of its second report on the implementation of the Milk Package, released in November 2016 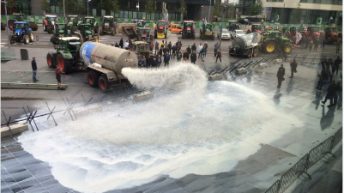