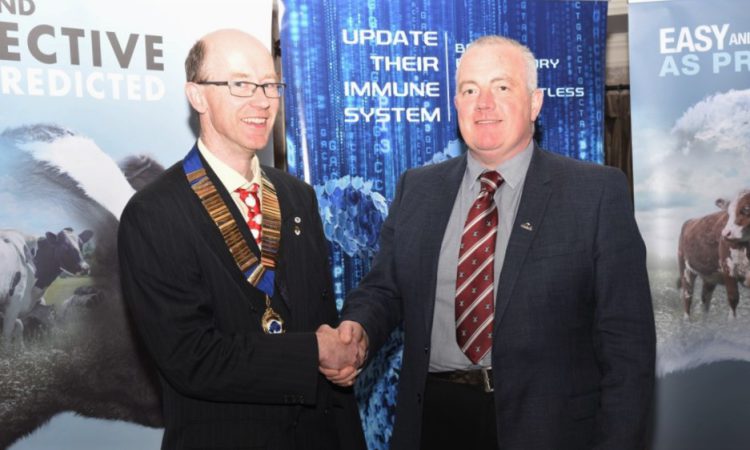 Paul Crawford from Islandmagee, Larne, has been practising since 1998.

Crawford runs a flock of over 100 Dorset sheep on his farm on the scenic peninsula off Co. Antrim’s east coast and has been running his own veterinary services business for the last 15 years.

Speaking at the AVSPNI AGM, he thanked his predecessor Philip Walsh for his hard work the previous year and extended his gratitude to the rest of the council.

Crawford outlined his priorities for the incoming year as well as the range of professional development events the association was planning.

He also highlighted several major issues affecting farming, which he hoped he could help vets to work on.

One of the main issues Crawford focused on was the fight against bovine TB, saying he hoped to “inject fresh energy and impetus” into the drive to eradicate the disease in the region.

TB has become a scourge of many Northern Ireland farms with incidence rates hitting their highest in almost 15 years in 2018.

Crawford also used the opportunity to highlight the supporting role vets could play in helping the industry with other key issues, such as antibiotic use.

“Antimicrobial use patterns are changing and for the positive over the past year but there are areas where further work can still be done to improve the control of supply and the need for antimicrobials by all classes of animal keepers,” he said.

“A new area for focus this year will be on sheep scab, which is getting out of control in Northern Ireland,” he added.

With reports of resistance emerging on the mainland to some of the commonly used treatments, a new strategic approach is needed.

A meeting will be arranged shortly for the key stakeholders to get together to discuss the issue and to hear of work in other parts of the UK to bring control to this devastating parasite.