Home » Machinery » Looking for a 100 horsepower tractor? Here’s what Grass and Muck had to offer

Looking for a 100 horsepower tractor? Here’s what Grass and Muck had to offer

The event organised by the Farm Tractor and Machinery Trade Association (FTMTA) featured the very latest in grass and farm machinery.

The main national and international machinery companies were present and here we take a look at what ‘farmer’ or 100 horsepower tractors were on offer.

Massey Ferguson showed its 5610 model. According to the company the tractor has a max horsepower of 105 and is fitted with the ACGO Power 4.4L four cylinder engine.

The tractor is fitted with a Dyna-4 transmission and the company says the tractor provides excellent manoeuvrability for hard work in the field, yard or on the road.

The Massey Ferguson also boasts an impressive lift capacity of 4,300kg, meaning that heavy-mounted equipment can be lifted with ease.

The New Holland T4 range of tractors were also on display and these tractors were designed with livestock and small mixed farmers in mind.

According to the company, its T4.105 model is powered by the 3.4L four cylinder F5C engine, which incorporates state-of-the-art common rail technology for precision fueling.

The T4.105 can lift 3,884kg, which is more than its own weight. New Holland say the award winning Lift-O-Matic Plus technology allows this to be done with just one finger.

John Deere also showcased its 110 horsepower 6110R tractor. The tractor has a FT4 engine which combines performance and fluid economy, the company reports.

The tractor has a 4.5L engine containing four cylinders and it also has a horse power reserve of 20 for difficult and testing conditions.

The John Deere 6110R has a rear lift capacity of 3,810kg and the company says that it can handle bales or big mowers with ease.

The company reports that the 105 horsepower tractor has the ability to handle every day tasks on livestock, dairy and arable farms.

The tractor is fitted with a Case International FPT four cylinder, 3.4L turbocharged and intercooled engine.

The tractor range also has a 40kph semi-power-shift transmission and has a rear linkage lift capacity of 5,424kg.

The tractor has a three cylinder engine and can reach a top speed of 40km/hour, due to its 20×20 gear box.

The 5100G MD GS also has a rear lifting capacity of 3,600kg and it also features a ‘stop and go’ shuttle, the company reports. 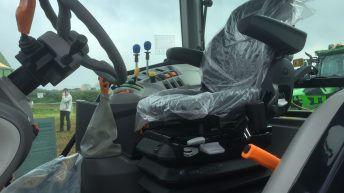 Pics and videos: Couldn’t make it to Grass and Muck? Here’s what you missed