The Ulster Farmers’ Union (UFU) welcomed a boost in milk prices back in late June, but warned that – with market signals positive – further increases would be justified in the coming months.

The farmers’ group says it is now time for delivery, and is calling for prices to reflect what is happening on national and global dairy markets.

UFU Dairy Chairman William Irvine spoke on the issue, saying: “The base milk price increase in June was welcome but market signals, including the UFU’s own milk price index (MPI), are all indicating that there are further increases in the system.”

“The last three MPI figures have averaged 31.74p/L [35c/L]. Even allowing for deductions, there is still a significant gap between what is being paid to farmers and what the market is returning.”

According to the UFU, Northern Irish prices are behind EU averages. The average EU price for January to May was 29.22p/l, the organisation says. Over that same time the Northern Ireland average lagged the EU figure by more than 3p/L, at 26.19p/L.

Despite encouraging signs of a buoyant market that can rise further, the UFU says that it remains concerned about price volatility.

Irvine continued: “In the autumn we want to work with processors to build on the debate there has already been about how best to tackle this problem.

“This will not be easy, but regardless of where we are in the dairy price cycle we cannot lose sight of the need to come up with robust policies to protect farmers from the damage caused by price volatility.” 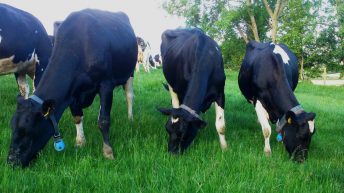