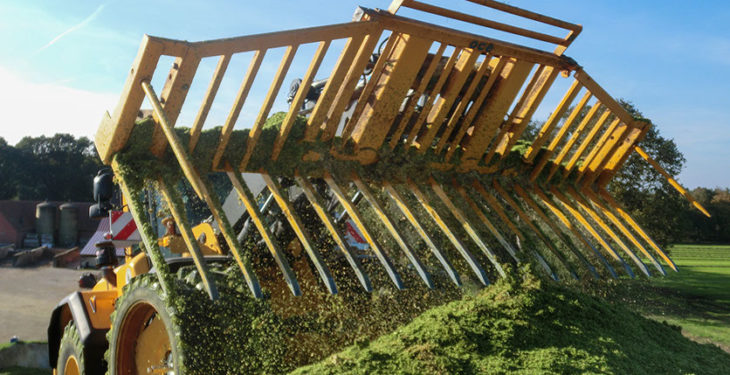 Similar to other models in the range, which are available for general order – 10ft, 12ft, 14ft and 16ft – the monster 18ft fork was “developed to enable loading shovels to handle the increased output from the new generation of high-capacity silage harvesters”, according to its creators.

According to John O’Connor of OCE, the original 18ft fork was built for a German agricultural contractor named Janssen Rhede some time ago. OCE has since built more 18ft forks, which are made to order. As a rough price guide, this “extra-large” folding unit costs about €9,500 plus VAT.

One of the key features of OCE’s “heavy-duty” silage forks is the use of square tines in their construction – which, according to OCE, are far superior to ordinary round tines in terms of durability. Additionally, the hydraulic ram geometry and folding extensions are constructed to “maximise fork operation“.

The chassis is another aspect which the manufacturing company highlights as a key advantage, noting that the main beam and folding extensions are constructed from precision laser-cut parts, which are welded both inside and outside for additional strength. This reinforced chassis can then cope with the added stress (from the square tines) without difficulty, claims the firm.

There is also a hydraulic accumulator fitted, which is why the folding extensions are consistently under pressure when at work. This, says the company, is ideal from an operator’s perspective – especially when the sides of the pit are being pulled in.

According to O’Connor, on the continent it is the range of tractor forks, the Ingo Range, which is really kicking off for farmers with large, high-powered tractors such as the articulated-steer Case IH STX.

These forks – based on the loader fork range – are ideal for pushing up maize and grass silage using high-horsepower tractors from 160hp up to 500hp, according to OCE.

The tractor forks were developed for the European market, where large, powerful tillage tractors are available to use during harvest time. The tractor-mounted forks are available for general order – in widths of 10ft, 12ft and 16ft.

O’Connor Engineering was set up in 2001, initially doing agricultural machinery repairs and modifications. It subsequently developed and began to manufacture attachments – building its first folding silage fork in 2002. From there, the company took off, creating a stockpiling pusher blade for Bord na Mona and a square-tine silage fork along the way.

OC Engineering now manufactures a range of equipment for both the agricultural and industrial sectors. For agriculture, the company fabricates quick-coupling three-point hitches and multi-shears as well as the forks. 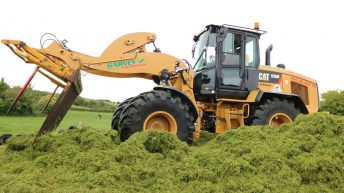 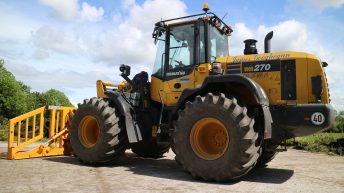