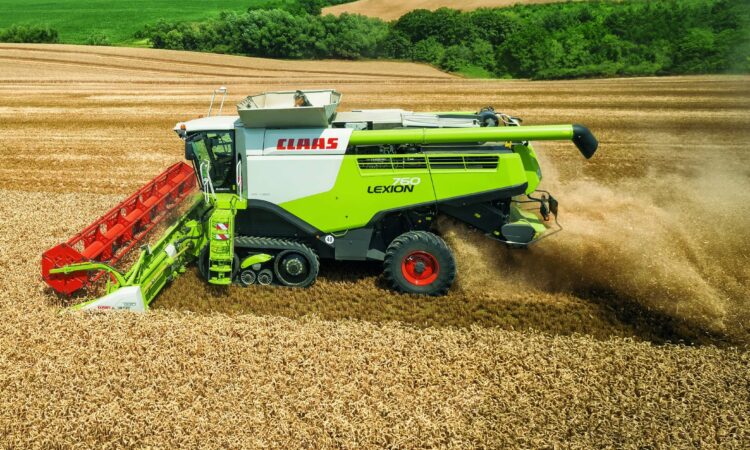 A new Lexion 760 combine in action

Next year will see the Lexion 700 combine range from German machinery manufacturer Claas further evolve with the introduction of a number of new features and improvements to the cleaning and residual grain separation systems, the straw chopper and electronics.

In addition to these new features, the combine range has been expanded with the addition of a new hillside Montana version of the Lexion 750, which like the larger Lexion 760 Montana will automatically self-level on slopes of up to 17 degrees.

Under the bonnet, the latest Lexion 700 series combines will, from 2016, be powered by engines that are Tier 4f emission compliant.

A particular feature of recent Lexion combine models has been the development of systems and components designed to increase performance, but use less engine power, so saving fuel and making more power available for other components.

One of the best examples of this is the Dynamic Cooling system originally introduced two years ago on the Lexion 780/770/760, and will now also be fitted on the Lexion 750 and 740.

With no restrictions of power from the higher horsepower engines and the Dynamic Cooling system, to ensure that the hybrid system can work at maximum capacity especially when on sloping ground, Claas has developed the new 4D cleaning system.

On combines specified with 4D cleaning, an extra third pair of rotor cover plates is fitted to the Roto Plus rotors, which are divided in two. These are automatically adjusted according to the lateral and longitudinal angle of the combine, but with the current separation and cleaning output also taken into account.

To accommodate the potential increased capacity possible due to the higher engine power of the combine and the 4D system, the top-of-the-range Lexion 780 now features a larger, 13,500L capacity grain tank. The discharge rate from the tank is 130L per second, which means that the tank can be emptied in less than two minutes.

On the new straw chopper, the drum has been increased in width by 5cm. As a result, crop flow into and through the chopper is more uniform, resulting in a more even chop length. The larger chopping drum also improves acceleration of the chaff, resulting in a wider spread pattern.

Instead of being hydraulically driven, the radial spreader on the combine is now mechanically driven, which means that it maintains a consistent speed and reduces fuel consumption.

For greater operator convenience, the new straw chopper can be fully controlled from the cab.