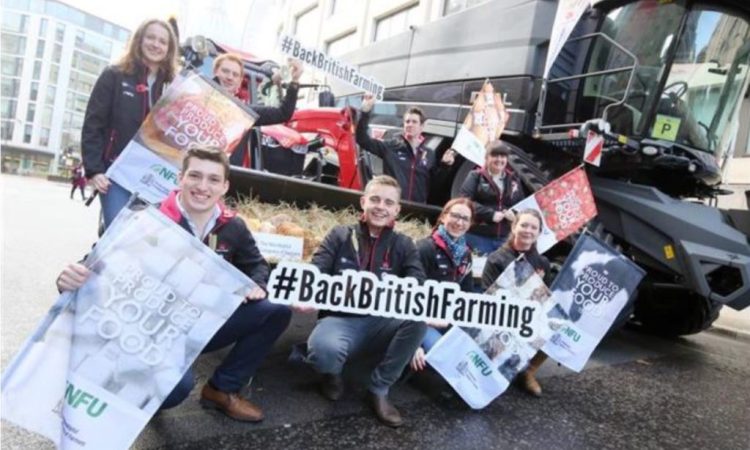 Hundreds of farmers from across the country will gather in London in March to join the National Farmers’ Union (NFU) in a rallying call urging Government to back UK standards.

The mass rally will bring together farmers, consumer representatives and experts in animal welfare and the environment, to call for future UK trade policy to block imports of food produced to standards that would be illegal in the UK.

They are in agreement that British farming’s world-leading standards must be safeguarded in future trade deals.

The event will take place on March 25 at the Queen Elizabeth II Centre in Westminster, London.

‘Farmers are ready to rise to the challenge’

NFU president Minette Batters said: “This year is absolutely pivotal for the future of our country, our farmers and the food on our plates. Nothing will determine this more than how the Government shapes trade deals with the EU and other countries around the world.

“This event is about bringing together people from across British business who acknowledge and value the importance of food and farming.

“They are crystal clear that the Government must hold the line that they will uphold British farming’s high standards in trade deals, and crucially, they must hold imports entering the country to that same standard.

“Failure to do so risks undermining British food production and our own domestic farming industry. We share the Government’s ambitions to deliver more for the environment, but in doing so, we must not offshore our food production to those parts of the world who do not share our values and standards.

This is an opportunity for hundreds of people to come together and make their views clear that the Government must not sacrifice British farming on the altar of free trade and we will be inviting MPs to attend to hear that message first hand.

“British farming can be one of the leading lights of post-Brexit Britain if the Government chooses to become a global leader in championing sustainable, climate-friendly food that our farmers produce here.

“Farmers across the country are ready to rise to that challenge and we stand ready to work with the Government on that journey.”

NFU Scotland president, Andrew McCornick added: “These are pivotal times for Scottish farmers and crofters. The weeks and months ahead will see a raft of decisions taken that will define our role as food producers and custodians of the land we live and work in.

As we determine our post-CAP future as well as trading arrangements with the EU and the rest of the world, it is crucial that politicians recognise and preserve the outstanding standards being upheld by our farming sector.

“At our board meeting today (January 28), it was unanimously agreed that Scotland will have a significant presence on March 25 at the Queen Elizabeth II Centre in Westminster, London.

“In addition, the board has backed a regional-based, consumer-facing event to be held across Scotland later this year.

“That will give members the opportunity to tell our fantastic story on the quality and provenance of Scotland’s food and drink.”

The Ulster Farmers’ Union has also confirmed plans to send as many as 40 representatives.

“We want to make sure that any food that comes in [to the UK] from outside deals like Australia or the US would meet our Red Tractor Quality Assured standards.”