Offers of SMP to public intervention begin to stabilise

For the week ending July 31, some 4,636t of SMP was offered to the measure, bringing the total amount of product in intervention to 246,864t.

Last week, Ireland offered some 389t to the measure, down from the 430t offered in the week previous. This latest offering from Ireland brings the total amount of Irish SMP in the measure to 29,548t.

France deposited the most amount of product to intervention last week, offering 1,048t and bringing the amount of French SMP in the measure to 49,078t.

To date, the total quantity of SMP bought-in to the measure by Member States at both fixed-price and tender is 325,390t.

Meanwhile, there is now a total of 119,345t of butter in private storage aid (PSA), figures from the MMO show.

Ireland has a total of 4,069t of butter in PSA and has not offered any butter to the measure since the week ending July 17, when it offered 2,751t.

Earlier this year, the levels of SMP in the measure breached the EU’s ceiling of 218,000t and then product was sold into the measure via a tendering process, before new rules on the intervention ceiling came into effect.

This move followed a strong take-up of SMP into intervention in response to the current market crisis, and follows on from the exceptional measures announced by the European Commission at the March Agriculture Council. 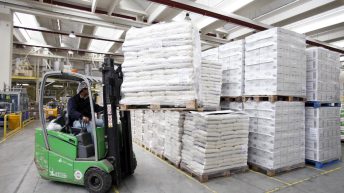