Home » National Ploughing Championships » Pics: A round-up of events at Day Two of the Ploughing

Pics: A round-up of events at Day Two of the Ploughing

The downpour of rain at Day Two of the 2016 National Ploughing Championships started after 2pm as the heavens opened.

It started off dry on Day Two, however the wet and mucky conditions returned in the afternoon which sent people heading for shelter.

Volunteers did their best to keep all the affected areas topped up with bark.

With a record number of visitors on Day One, visitors are continuing to flock to the site and exploring and visiting the 1,500 exhibits can build up an appetite.

The Ploughing is a popular event for sports stands, with Elverys and the GAA Store proving very busy.

Hurley makers such as former Tipperary hurling legend, Lar Corbett, and the famous Galway hurling family the Cannings also have stands at the event.

It is clear to see which team this display is supporting in the All-Ireland Football final replay to be played on Saturday, October 1. However, it is not as impressive as this Mayo supporters attempt we seen last week.

Livestock owners are busy at Day Two of the Ploughing as they prepare their cattle and sheep for showing over the next two days.

This three-year-old Simmental cow from the Rathnashan herd was getting a pampered blow-dry this morning.

Bringing home a red rosette after one of their bulls took first place in the show ring yesterday, Noel Hogan from Co. Carlow is happy with how his cattle are performing.

The Senior Horse Plough Class is getting underway today at the Ploughing, with competitors hoping the weather stays fine.

Kildare Ploughman, Pat Commone, was looking forward to competing at his fifth year at the Championships with his two draught mares.

I took up ploughing eight or nine years ago, we had a driving club at home and I decided to take up the sport and here I am now.

“The ground conditions look good, we have a nice level area here to plough. But you don’t really know what ploughing conditions are going to be like until you turn the first sod,” the Newbridge man said. 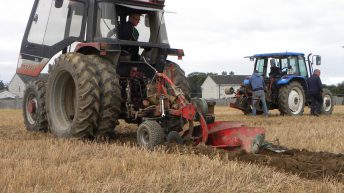 See all the results from Day One of the Ploughing here