LAMMA 2018, while only managing to run for one day this year due to severe winds and unsuitable conditions, nonetheless had an extensive array of entries for its annual ‘Innovation Awards’ this year.

Over 80 entries were put forward for the awards – which are open to new products exhibited at the event – across five categories.

According to the show organisers, the shortlist was judged by a panel of 10 experts, led by chairman Chris Rothery, on the first morning of the LAMMA show last Wednesday (January 17), which was held at the East of England Showground, Peterborough.

The five categories being judged were:

Commenting on the entries, Rothery said: “We had a very good response again this year – over 80 – which we believe is a record.

“The standard was very high, as we have come to expect, with some very interesting ideas and concepts that are likely to be of significant practical value to farmers.

“We look forward to even more companies taking part next year, when we plan to introduce one or two more categories.”

The machine consists of two gangs of discs, between which are mounted a row of de-compacting, height-adjustable tines. It can cut roots and mulch while eradicating pans and improving drainage in one pass. An optional hydraulic headland frame lift for narrow headlands lifts the rear of the machine vertically towards the tractor.

The Wessex BFR-180, winner of the livestock equipment category, is a modular feeding and bedding system that can be configured as a bale feeder, a straw spreader and bale feeder combination or a bale feeder with an extension chute.

It can feed round bales of hay, haylage, straw and silage from either side. With the Crossfire straw spreader attached, bedding and feeding tasks can be undertaken with the same machine, bedding from one side with feed-off at the other.

The Wessex Sidewinder extension conveyor attaches to the BFR-180 for higher level feed-out.

InTouch is said to enable rapid ration production, intake and production monitoring and control of feed and fuel costs.

InTouch has collected data on more than 1.3 million cows from nearly 10,000 farms in 25 countries, according to the manufacturer.

The new InTouch controller and application has an enhanced display, an increased communication platform with Wi-Fi link, Bluetooth and 3G Connectivity, enabling “instant” transfer ration updates and loading reports between the InTouch Centre and the farm. Its programmable rations facility can store up to 100 rations and groups.

In first place for environmental innovation, Mzuri’s Pro-Til 3T Xzact combines a strip-till drill and a precision seeder in one implement – supposedly capable of sowing into all types of arable and precision crops in a single pass.

The Phieldtek PCN210 is described as an on-the-go soil sampling device designed to improve the quality of a PCN (potato cyst nematode) soil sample. The machine permits increased sampling intensity, collecting 210 cores of soil/ha rather than the standard 50 cores in the UK.

The PCN 210 extracts cores at around 3m intervals. The machine can be towed behind a quad at speeds up to 16kph. A spring-loaded auger is pushed into the soil to pick up a core.

The core is then pushed into a collecting container, before springing back into position for the next sample. Each 1ha grid can be sampled without stopping. 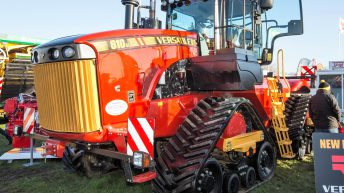 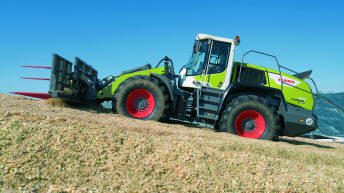 First big Claas loading shovel sold in the UK; is Ireland next?