Having been involved with precision farming technology for a number of years, Case IH upped its game significantly with the development of the autonomous or driverless tractor concept.

A key attraction at the Case IH stand at the SIMA show, the concept tractor was developed on the back of “customer feedback” with the aim of utilising the operator’s time to best effect.

According to Case IH, the Autonomous Concept Vehicle (ACV) can be operated unmanned and monitored remotely using “advanced safety and control systems” and is based on the existing Case IH Magnum tractor.

In addition, the tractor was designed to relieve drivers from the monotony of working long hours in a cab and to allow them to make better use of their skills.

The concept vehicle, it says, has the capacity to work around the clock to make best use of good weather conditions. The vehicle can be integrated into fleets of existing machines, to work alongside them.

Accurate steering from an ‘unmanned vehicle’

Dan Stuart, Autonomous Concept Vehicle Specialist with Case IH, said the ACV retains much of the conventional technology of a modern tractor.

He said, “The tractor uses an ‘RTK’ form of ultra-accurate GPS to provide parallel steering capability with a variation of less than 2.5cm, which many farmers are already using to ensure missed or overlapped land between passes is no more than this width.

“In addition to minimising input wastage, such steering accuracy is also key to the successful adoption of techniques such as mechanical weeding between crop rows, to reduce pesticide usage and, where organic production is practised, make this more viable.

“It also incorporates telematic systems already in use on some current tractors, designed to allow farmers and managers to see where a tractor is, what it is doing and even how much fuel it has – all from a tablet or farm office PC,” he said.

The addition of radar, laser and sensor proximity systems, along with wireless technology, allows the machine to be monitored and controlled via a PC or tablet computer, says the company.

Should the tractor come into range of anything that might pose a risk to the machine, or be at risk from it, then it stops, the owner is alerted, and the machine does not restart until camera feeds are checked and a decision on whether the tractor can continue is taken.

Not available on the market just yet

Currently, the ACV is still a concept, but a testing programme working with farmers in real-world situations is in its early stages. This will cover more than simply how the product itself performs.

In the meantime, certain elements of the ACV’s technologies are suited to integration into conventional tractors in the nearer future.

Much of the technology required for autonomous vehicles, such as obstacle detection, is currently available.

“As these technologies are more widely adopted by the auto industry and their availability increases over time, we anticipate reduced costs.

“As a result, while we may not see the full introduction of cab-less autonomous tractors in the short term, components of their technology are likely to become available on new tractors much sooner,” said Stuart. Click here to see the ACV in operation 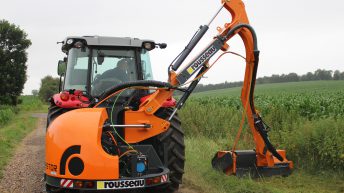