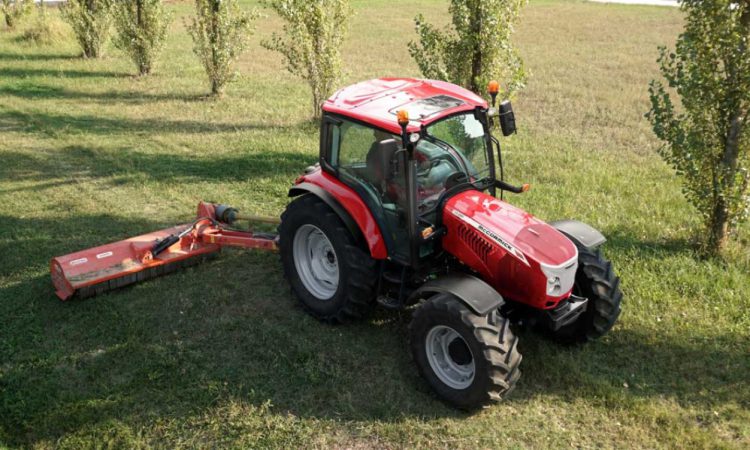 Stage V emissions regulations have finally caught up with smaller tractors, and manufacturers are busy introducing new models which comply with the latest EU regulations.

McCormick has recently chimed in with the announcement of a new 75hp model known as the X5.085. Although modest in power output, this machine would appear to be something of a harbinger of things to come.

The company sates that it has positioned it between the X4 range, which currently meets Stage V, and the ageing X5 range, which does not. Both the present X4 and X5 series are powered by Deutz engines, the newcomer has the 3.4L, four-cylinder, F34 Fiat Powertrain (FPT) motor.

The choice of engine marks a departure for the company which has usually relied on Deutz to power its smaller tractors. The shift to the FPT unit will continue with the whole of the expected new X5 range having it by the end of the year.

Deutz engines will also disappear from the smaller X4 series as the company switches to Kohler to supply its motive power. Although an American company, it acquired Italian company, Lombardini, in 2007.

Stage V compliance in the X50.85 is achieved by the use of diesel oxidation catalyst (DOC), diesel particulate filer (DPF) and exhaust gas recirculation. (EGR).

The latter being a system that is fading in popularity among other manufacturers who are trending towards the use of adblue to reduce NOx emissions, as will McCormick with the rest of the X5 range.

Although only 75hp the tractor boasts a 3,900khg lifting capacity at the rear and 1,700kg on the optional front linkage. The rear linkage is mechanically controlled with duplicate controls on the rear wheel arch.

Being a small tractor, it would be expected work in confined areas. McCormick has fitted a a front axle of 1,950mm between flanges to bolster its agility. However, the company claims that its ground clearance is not comprised due to a 34″ rear wheel.

The front loader frame is also said not to interfere with either parameter and the loader itself features a suspension system reliant upon two nitrogen-filled accumulators.

Coupling the loader to the tractor is also said to be easier, and once attached control is by a new, dedicated, joystick. The new joystick will also be a feature of the incoming X5 machines with the shuttle control being integrated into head on the powershift models.

At the moment, the MX.085 has five transmission options, two sets of synchro ratios and three power shuttle configurations.

Three spool valves are fitted at the rear and two are available for the loader. They are fed by a 56L/min pump which is flange fitted to the engine block.

The future X5 cabs are to be a new design with increased vertical visibility, but for the moment, this latest model has the standard four-pillar cab attached via four ‘silent block suspension’ mounts.