Home » Machinery » The Amazone ZA-V spreader: Everything you need to know 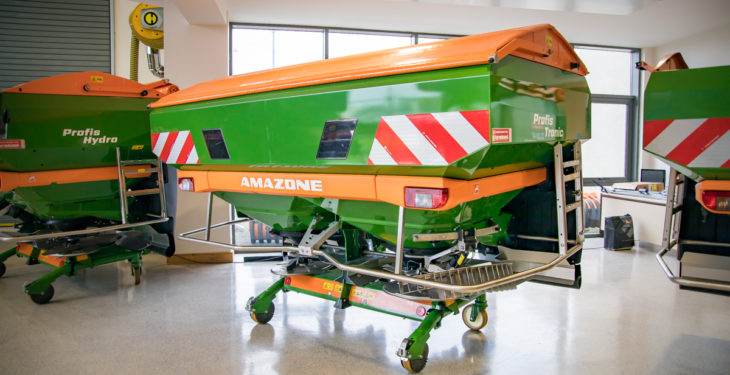 Irish distributor Farmhand recently held an open-day showcasing its latest fertiliser spreader and sprayer technology on offer from the German giant that is Amazone.

This article will focus on spreader developments from Amazone; stay tuned to AgriLand for a follow-up on Amazone’s sprayers.

Plucked from its spreader line-up, Farmhand presented its new Amazone ZA-V spreader range – released earlier this year. It is available in various models, with a host of add-ons and enhancements.

Farmhand area sales manager Cormac Megaw noted some of the benefits of the new ZA-V. The available hoppers have a range of capacity from 1,700L to 4,200L. They can shake out up to 390kg/minute, it is claimed.

Along with this, it was highlighted that the spreader is a ‘brand new’ machine, from the bottom up to the new roll-up tarp (cover). The hopper is built from one sheet of metal, with no welded seams – meaning nowhere for fertiliser to stick. This makes it easier to clean.

There are three different frame types, from a 2.2t payload capacity up to 4.5t. Other new additions include a new payload limiter, which can spread from 10m up to 36m, and a new vane design. The company claims that the ZA-V offers a “massive” work-rate, with shutters allowing spreading rates of up to 6.4kg/s.

The double-bottomed hopper is copper-phosphate coated. It’s dip-coated in Amazone’s factory, which opened a new paint facility earlier this year. This means all components are painted inside and out. This coating was described as “very rugged, reliable and corrosion-resistant”.

There are two different drive options for the spreading discs: mechanical drive (PTO) or a hydraulic drive option on the higher-spec Profis Hydro machines. It was highlighted that the agitator is gentle on fertiliser, minimising break-up and dust issues.

Standard Farmhand-supplied machines come with mudguards, a safety rail, road-lights and low-level sensors. There are seven different models in the current line-up.

The ‘magnificent seven’, so to speak, are listed below:

So what’s the difference?

ZA-V: Starting with the most basic spreader, the ZA-V is a purely mechanical machine; setting the spread-rate is done manually, and shutters are opened and closed with a hydraulic ram.

ZA-V Easy: The first of the electric machines, the Easy uses the ‘easy set’ terminal. It’s a little sophisticated but has a nice digital read-out, telling you what the (electrically controlled) shutter position is. You can also use the new electric limiter – the limiter V+ – with this machine.

It’s also possible, from the cab, to adjust your spread rate, as well as your different boundary positions for different types of boundary spreading operations.

The ZA-V Control uses the new Amaspread terminal. This new control terminal gives the operator the option to store up to 20 fertiliser profiles, along with a number of jobs and customer information, and also speed-related messages.

It is also possible to have six part-width sections, across the entire width of the machine.

The ZA-V Profis Control also uses the Amaspread terminal. It has weigh-cell technology – as do all spreaders bearing the Profis name.

Meanwhile, the ISOBUS-controlled machines offer the option of different terminals from Amazone; these include the Amatron 3, CCI 100 and 200 terminals, the Amaspread touch-screen terminal, and then – if the tractor is equipped with ISOBUS – the tractor’s own terminal.

Those machines are PTO or hydraulically-driven.

Amazone also offers its own GPS receiver and GPS software to control the machine as well, but it’s still possible to control with outside systems.

The simplicity of using the ISOBUS software and terminals was highlighted, with Megaw comparing it to using a smartphone.

The issue of the volatility of farm-gate prices was also noted, with farmers focusing more on improving efficiency inside the farm-gate. Two of the biggest costs for tillage farmers are fertiliser and spreading; farmers are now looking to maximise efficiency to keep costs under control – and so are prepared to go ‘higher tech’ to achieve this, according to Megaw, who has noted this trend in spreader and sprayer sales.

“In lots of cases, by the time he comes to change his machine again, he has made back the money his initial investment was – just through added efficiencies. So we’re finding a lot of customers are asking ‘how can I do this more efficiently; how can I do this better?'”

There are two weigh-cells in the ZA-V Profis machines; both are 200Hz (hertz) weigh-cells, weighing at 200 times per second. Mounted ZA-V spreaders are capable of online calibration.

The machine can adjust its calibration factor and its rate for every 25kg spread.

There are three spreading disc options; included are tungsten carbide coated versions, which extend the life of discs with corrosion-resistant vanes. 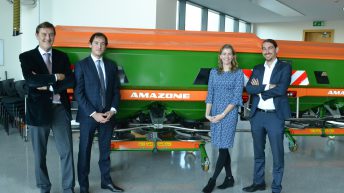 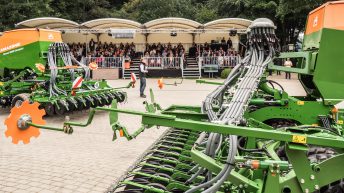