Home » Machinery » The front loader that puts everything ‘under your thumb’

The front loader that puts everything ‘under your thumb’ 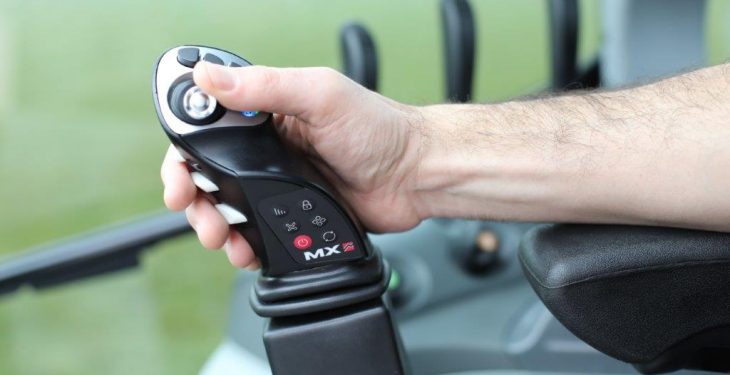 Front loader manufacturer MX’s new ‘e-Pilot‘ is claimed to be the only control system designed specifically for the rapid combination of up to three movements – making it possible, for example, to lift/lower, crowd/dump and use a third service (function) at the same time with no loss of speed.

The company says that this puts e-Pilot at the head of the front loader class, at least in terms of ease and speed of control.

A so-called Direct Control miniature thumb-operated joystick is perched at the top of the mono-lever; it provides two control axes – allowing a flick of the thumb to “progressively” activate third and fourth functions.

A waterproof, apparently shock-resistant and electro-magnetically shielded module is fitted within the tractor’s dashboard. This, says MX, guarantees “seamless” communication between the joystick handle and the loader’s hydraulic control valve. A ‘BUSCAN’ cable linkage is part of the installation.

The double-action control valve is fitted with two stepper motors, which are mechanically connected to the control valve spools. These, says MX, allow for “reactive and precise control”, independent of any random hydraulic ‘disturbances’ from the tractor.

The Auto-Unload system allows a load to be emptied – by opening the grab and tipping the bucket at the same time. The Auto-Level system then automatically returns the bucket to the horizontal position. A single long press on the Continuous Third Function button allows a hydraulic motor to be powered up, without having to hold the button down – for example, if using a bucket with an auger.

A range of additional functions, such as boom suspension, can be operated from the main controller.

Who or what is MX?

MX is a French manufacturer of tractor-mounted front loaders, attachments, front linkages and bale handlers. Operating in more than 60 countries around the world, the company is six decades old and is headquartered near Rennes in the north-west of France.