A new pilot scheme to improve the environment, reduce the number of on-farm inspections and help farmers comply with payment rules has been launched in Northern Ireland this morning.

Those behind it say that farmers who pass will have a lower chance of being selected for inspection the following year.

The pilot project has been developed by the Water Management Unit within the Northern Ireland Environment Agency, the department’s Countryside Management Unit and the Ulster Farmers’ Union.

The idea is that the voluntary audit will give farmers the opportunity to put potential issues right and also cut down on the number of inspections.

Denis McMahon, DAERA permanent secretary, said: “The aims of this voluntary scheme are to protect and improve our environment and help our farmers keep more money in their pockets.

“We can do this by identifying and tackling any minor environmental issues around the farm and addressing them promptly, thereby improving the environment and reducing the chances of cross-compliance inspections and breaches.

“The scheme – which will operate in a number of targeted catchment areas – will see DAERA staff working one-to-one with farmers to carry out the audit and make recommendations on ways to address any issues.

This gives farmers the chance to put right minor matters which may have had the potential to impact on their payments.

“If successful, the wider pilot approach could lead to reduced bureaucracy, and an overall reduction in the number of different inspection visits to the farmyard.”

‘No softening of standards’

The new scheme is set to focus on providing advice; however, the same strict standards will apply.

David Small, NIEA chief executive, said the pilot scheme does not mean a “softening of its regulatory duty”.

He said: “There are many minor issues on farms which are considered to be of a very low severity and appear to have a minor impact on water quality or the wider environment; but collectively, across thousands of farms, that really adds up.

“This advocacy-first approach will offer an early warning system to put right any potential environmental issues and at the same time protect their payments.”

What is being inspected?

The inspections will mainly focus on cross-compliance – checking key areas such as: general farmyard tidiness; run-off; and tank storage capacity – among several other points.

Inspector, John Scott, started this morning’s visit by checking that medicine cupboards were in good order – locked, with a ‘sharps box’, and free of any out-of-date drugs.

He also checked the oil tank to ensure it was not leaking; as well as the area where bales would be stored, tank storage and general farmyard tidiness. The farm’s nitrates levels were also checked.

Thankfully, Barclay Bell had little to worry about today; however, a common issue highlighted was the potential for water run-off to use up tank storage.

“That could be a problem on some farms as it eats into the 22-week storage,” DAERA inspector John Scott said.

“We could maybe look at fitting new guttering and downpipes to help, and we could add a lip around the midden to direct any dirty water towards the tank.

There are good records on this farm, which is important – both for the cattle and the sheep – the veterinary supplies are also in good order and locked away and the oil tank is well kept.

“Today is an informal visit – my tickboxes are only remedies – but there’s a lot of good practice here and the watercourse is clean, which is the main thing.”

What happens if issues are discovered?

A letter will be issued highlighting minor areas which can be improved should issues arise during an audit.

Officials were clear that the purpose of the scheme is to give advice and work towards supporting corrective action; however, significant cross-compliance breaches causing environmental harm will be reported. 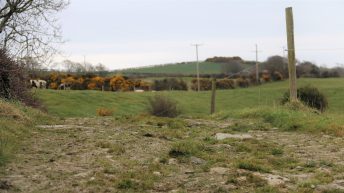