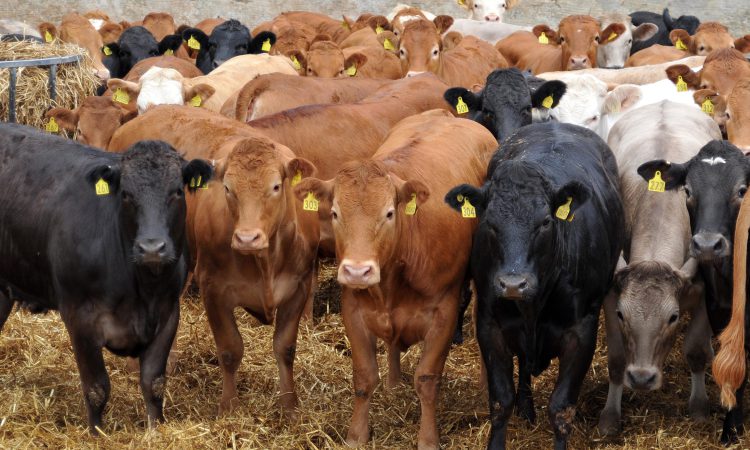 The beef trade for prime cattle in the UK is continuing to improve despite ongoing efforts by Irish beef processors to cool prices in the market.

Last week’s Livestock and Meat Commission (LMC) weekly bulletin noted that for the previous week, the average average steer price was up by 1.2p/kg to 406.4p/kg, while the R3-grade steer price increased by 1.8p/kg to 413.4p/kg.

According to the LMC, this placed the UK’s R3-grade steer price 10.4p/kg above the R3 steer price in Northern Ireland for that week.

This puts the UK heifer price for an R3 grading animal 11.4p/kg higher than the equivalent price in Northern Ireland for the week.

Last Friday’s LMC bulletin noted that for the previous week in the Republic of Ireland, the R3 steer price was back 2.4p/kg to the equivalent of 366.2p/kg.

This would indicate the price difference between Ireland and Northern Ireland stands at 36.8p/kg or 43c/kg behind.

Stay tuned to Agriland for further updates on beef prices.

This week’s quotes for beef cattle have caused many farmers to raise an eyebrow, as factories begin to put pressure on beef price.

The mood has changed among beef procurement staff this week, and those who were freely quoting a €4.30/kg base price for heifers last week have today cited a quote 10c/kg short of this.

Advertisement
Factories that were citing higher quotes for cattle last week, appear to have taken prices back, while those that were behind on price last week, have held their prices this week.

Starting with heifers, €4.25/kg base price appears to be the general run this week while many processors are quoting €4.20/kg on the grid for Quality Assured, in-spec heifers.

Next up is steers and €4.20/kg base price for Quality-Assured, in-spec bullocks would seem to be the general run of quotes.

Breed bonuses are available for in-spec Angus and Hereford heifers and steers and vary in amount from factory to factory.

Some factories may also offer farmers an additional 10c/kg bonus for cattle killing out with a specified carcass weight.

Cows however, seem to have held well for this week with €3.50, €3.60 and €3.80/kg on offer to farmers for P-grade, O-grade and R-grading cows respectively – with some processors citing quotes 5c/kg short of this.

More money for cows is likely available to larger suppliers of cows and farmers with numbers of heavy, well-fleshed cows should bargain hard on price before selling.

An analysis of this week’s factory quotes would indicate that the drop in prices in the heifer and steer category is a ‘muscle flexing’ manoeuvre by the factories and may not be directly linked to any corresponding drop in demand.

The turn in weather conditions where significant rainfall occurred in many parts of the country over the weekend, may have been seen by the factories as an opportunity to apply pressure to this week’s cattle price, as after the weekend’s weather, some farmers will be lifting the phone to their procurement officer to book in a load of stock to the factory this week.

Indications early last week showed that a tightener was coming on beef price as Agriland reported that at least two of the country’s major feedlot operations had pulled back from the mart trade.

It remains to be seen what will happen with beef price in the coming weeks however, demand is strong and factories are no doubt, keen to catch up on last year’s throughput figures.