Under finished lambs now an issue in Northern Ireland

There has been an increase in the number of under finished lambs presenting for slaughter in Northern Ireland, according to the Livestock and Meat Commission (LMC).

According to the LMC, the factories have a preference for lambs with a fat class of at least 3 to meet the widest range of customer specifications.

However some customers will also accept lambs that achieved a fat class 2.

The LMC is now reminding flock owners of the importance to present lambs for slaughter that meet current market requirements, to help maximise returns to the farm enterprise.

During the six week period ending September 17, 60% of price reported lambs achieved a fat class 3 at point of slaughter, a notable decline from 73% of lambs during the corresponding period in 2015.

Meanwhile, the proportion of lambs achieving a fat class 2 has increased to account for 32% of the price reported kill during the six week period, a 10% increase from the same time in 2015.

Advertisement
The LMC point out that there has been a notable decline in the level of fat cover on lambs at the point of slaughter in recent weeks and this may be due to the changeable weather conditions affecting animal performance at grass.

As a consequence, flock owners are being encouraged to select lambs carefully for slaughter as under finished carcasses can attract penalties and reduce the sale value and profit margin.

Fat class is only one aspect of current market specifications for lamb with conformation, carcass weight and Farm Quality status are also important factors to consider when presenting lambs for slaughter.

At present, the major processors in Northern Ireland are paying up to 21kg with no payment for any extra kilos above this weight limit.

The largest majority of lambs killed in Northern Ireland have achieved the desired R and U grade conformation scores, although there has been a shift between the two grades year-on-year.

Meanwhile, the proportion of R grade carcasses declined by 3% year-on-year to account for 57% of carcasses slaughtered in the 2016 period. 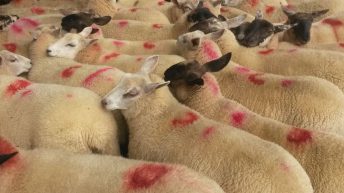