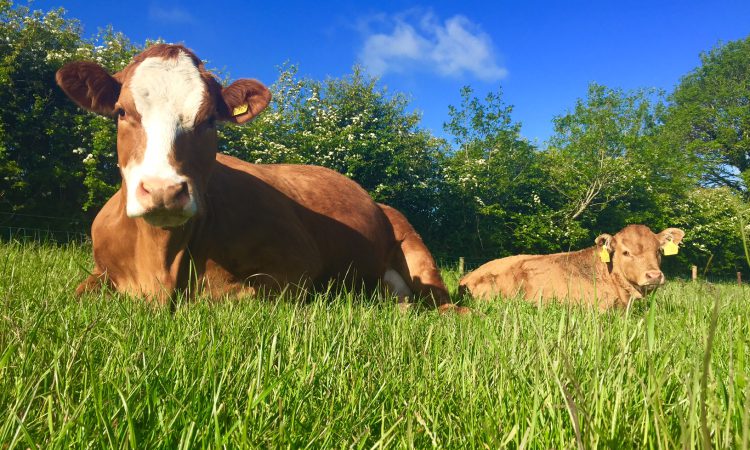 From a maternal aspect, where artificial insemination (AI) is being used on the farm, the opportunity to breed the desired females through AI sires has been aided by the use of sexed or sorted semen.

The breeding season brings with it an opportunity to enhance the genetic profile of a herd. Along with trying match the physical traits to the cows, there is also the genetic potential and merit that has to be factored into the decision making.

One of the main advantages of using AI sires is that it reduces the limitation of all progeny being born to just one or two sires – which can be the case on small farms that breed to stock bulls.

Recently, Noel McNeill – who is a beef advisor from the College of Agriculture, Food and Rural Enterprise (CAFRE) – reviewed the advantages of sexed or sorted semen for use on suckler farms.

Noel explained that the ability to control the gender of the calves being produced on a farm is a management aid for producing a product the market demands.

The dairy industry has embraced the use of sorted semen and are achieving significant progress.

Adding to this, he stated: “One of the main drivers for this in the dairy herd is the fact the male dairy calves were seen as a by-product, and increased demand for this semen has improved the gender accuracy by up to 95% – which was seen by a trial conducted by AFBI (Agri-Food and Biosciences Institute).

“Another positive impact of the use of sorted semen is the increasing speed of genetic progress within a herd, especially when used on maiden heifers, by reducing the generation interval.”

Through the use of female sexed semen, Noel mentioned how closed herds can produce a female replacement from high genetic merit maternal bulls mating with the best maternal cows.

For farmers targeting a steer or bull-beef finishing system, he had this to say:

“The ability to produce bulls from a high genetic merit terminal sire can be exploited to increase the value of male progeny for the beef supply chain.”

There have been debates over the conception rates in the use of sexed semen. However, through trials carried out in AFBI, a positive analysis has been compiled.

“AFBI have completed trials with sexed semen with positive results. They have observed the best success with sexed semen on natural heat observation and insemination compared to synchronisation programmes,” Noel said.

“AFBI have trialed the use of female sexed semen on maiden heifers with measurable success, as female calves have smaller birthweights and are easier to calf.

“Also, because they are heifers producing heifers, it is increasing the speed of genetic improvement within the herd. AFBI trials have also shown positive results from use of male sorted semen within the herd.”

Moving to AI this spring

If AI has not been used on the farm before, Noel advised to use conventional semen first, to see what conception rates can be achieved. If a herd is not seeing a conception rate of 60% or better, then a few technical areas should be looked at before using sorted semen.

Breeding animals should be up to date on all planned health treatments and vaccinations, such as Bovine Viral Diarrhoea (BVD) and Leptospirosis, well in advance of the breeding season.

He added: “Pre-breeding scanning will allow you to pick up on problem cows before the breeding season starts. Cows should be on a rising plan of nutrition after calving, with a target body condition score (BCS) of three at time of breeding.

“No major changes in diet should happen in the month before breeding. A herd trace element profile can be done using blood tests to make sure there are no issues, or to inform the decision to supplement as needed.

“Stress should be kept to a minimum when handling animals for insemination as this can have an effect on the conception rate,” he added.

Not every bull is going to have sexed semen available from them, and for the bulls that are advertised as sexed semen, some AI companies will require a one to two month period of order notice, in order to export the semen to be sorted.

Sexed semen is also more expensive than conventional semen, although this extra cost can be offset by the fact that a maternal-bred bull calf is worth less than a terminal bull calf, so reducing the amount of these will improve profits.

Concluding his presentation of sexed semen’s benefits, Noel stated: “It allows for more precision in the breeding of a suckler herd, and it provides farmers with two avenues to focus breeding on; produce better terminal animals for the beef supply chain, or to produce breeding females for retaining or selling in breeding sales.

“Farmers should take time to look at a bulls Estimated Breeding Values (EBVs) [or €urostar indices] before selection and pick the most suitable bulls for the females in their herd,” Noel said.

“Some of the higher-demand bulls may not be available, as it takes three times as much semen to produce one straw of sorted semen, compared to that of conventional. This however, may not be the case in the years to come, as breeding companies are starting to move more in this direction.

“Improving genetics will improve profit in a suckler herd, and sorted semen is another tool a farmer has to address this.

“If a farm is seeing good success in using conventional AI there is no reason why they shouldn’t try sorted semen and see the advantages it can deliver within their herd,” he concluded.