Home » Machinery » Video: Have your weeding done by robot Dino 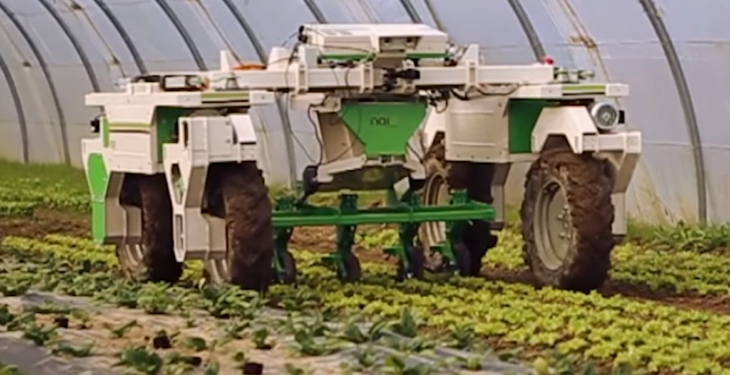 Dino is guided by RTK (real-time kinetic) GPS and cameras to mechanically weed and hoe vegetables, going in as close as possible without damaging the crop. Advertised as a ‘multi-functional straddling robot’, the contraption can also be used for sowing.

Designed to be more sustainable and environmentally-friendly than current farming methods, Dino will “reduce the need for chemical sprays, while also cutting down on tractor use, saving both on diesel and hours”.

According to Naio, the electric robot can operate for up to eight hours on one charge and is autonomous. On its website, the company says: “The robot will weed one bed after another by itself without human supervision.” The robot will then send a text to the farmer when the work is finished.

Toulouse-based Naio Technologies, which specialises in developing and marketing robots for viticulture and agriculture, created Dino with a ‘scalable’ and ‘flexible’ design, allowing customers to adapt the robot for their individual needs.

Dino weighs just 800kg – in order to reduce soil compaction. It can go at a speed of 3-4kph and can get through between 3 and 5ha of work per day. Its operating width is from 1.2 to 1.6m.

Dino was created as a bigger version of the established Oz robot, which was designed for small farm enterprises. The robot can cater for vegetable farms of 24ac (10ha) or more, which Naio claims is a first for robotic operation.

In terms of tools and accessories, the machine can be equipped with inter-row plough-shares, spring harrows, comb harrows and specific shares for in-row weeding.

First launched in June 2016, Dino has since undergone several tests, which are ongoing this year. Lionel Montchalin, Naio Technologies’ Product Manager, recently spoke of plans for 2017, stating: “This year, Naio Technologies will market 10 Dino robots as part of its partnerships with different agricultural players in France and Denmark.

“Lettuce is the first crop on our list this year. Trials will also be conducted on other types of vegetables as well as on-field crops.” 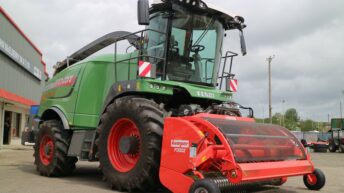 Pics: ‘Up close and personal’ with Ireland’s first Fendt forager