Video: ‘Revolutionary’ articulated combine gets a boost, to 650hp 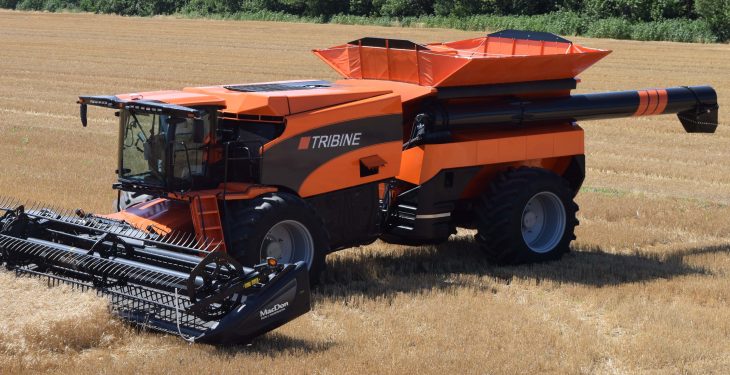 The Tribine combine is built on an articulated frame

Tribine, a North American company known for its huge, articulated-steer combines, has upped the specifications of its giant harvesting machines.

While unlikely to find their way to Ireland any time soon, the advent of these machines highlights an interesting trend in combine harvester development.

Up to now, Tribine combines were powered by two Cummins engines – a 9L and a smaller 6.7L unit – to produce a total of 590hp. A 1,900L fuel tank enabled 24-hour, round-the-clock operation. Now the Kansas-based manufacturer fits two 9L engines instead, with a total output of 650hp. A 500-gallon fuel tank is standard.

The Tribine concept was developed over the past couple of decades. The machine is notable for its articulated-steer frame; the rear section is home to a massive 36,000L grain tank. The grain tank’s capacity is akin to that of a high-capacity tractor-drawn ‘grain cart’ or ‘chaser bin’. In reality, the Tribine design effectively mates a high-capacity combine with a grain cart, via a heavy-duty steering pivot.

In some scenarios, the company claims that a single Tribine machine can replace a separate combine and grain cart.

The rear wheels/axle also pivot, along with the articulated frame, to ensure that the machine can turn in a manageable circle.

The machine is not just big; it’s also heavy. It tips the scales (empty) at over 22t. However, the huge grain tank can be emptied in under two minutes.

The main combine harvester components, including what’s claimed to be the world’s biggest threshing and cleaning system, lives in the front section of the machine. So too does the cab. Inside, there is no steering wheel. Instead, the machine is steered using a joystick.

The glass cab floor provides “unrestricted visibility down towards the header”. The ladder in front of the wheel allows “easy access”, with a “spacious walkway” for hinged door entry.

Others have toyed with the concept of articulated, pivot-steer combine harvesters. Prototype 2030, a design project conceived back in 2010, also championed this approach.

That concept proposed the notion of a 700hp bio-diesel/electric power train, driving eight 65hp, in-hub electric wheel motors on independent axles. The idea was that the motors could be engaged or disengaged, depending on the amount of tractive effort needed for the conditions.

With a 1000L fuel tank and an electric generator, it was envisaged that Prototype 2030 might go twice as long as an existing machine before the need for refuelling.

Hub-drive technology was also proposed for the hybrid threshing system. The aim was to reduce the overall number of moving parts, leading to lower running costs and greater efficiency.

The designer behind this project, Henry Parnell, received a Bugatti Trust award for this work back in 2010, which was undertaken in collaboration with AGCO (Massey Ferguson). 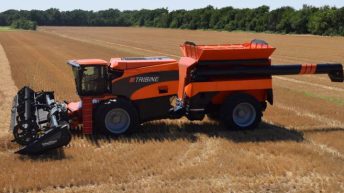 Video: 590 horsepower Tribine combine rolls of the production line in the US