Gardai in Navan, Co. Meath are appealing for witnesses after a cyclist, a male in his 50s, was knocked off his bike by a John Deere tractor hauling a green slurry tank.

A post on the Meath Crime Prevention Facebook page said that the incident happened on the Kells Road, around 5.30pm yesterday evening, February 15.

It is understood that the road traffic incident happened on the Kells side of the Navan Ford Centre.

The cyclist is reported to have suffered some bruising and cuts but otherwise is ok.

Anybody who was passing along that stretch of road at approx 5.30pm yesterday and saw the incident or know who owns the tractor and tank are asked to give Navan Garda Station a call on 046-9021445.

Last year, an incident between a tractor and a cyclist caused a stir online, with the cycling community unimpressed with the tractor driver’s behaviour.

Featured on the Facebook page Stayin’ Alive at 1.5, which promotes safety among road users by asking drivers to give cyclists a 1.5m gap, the video shows the tractor overtaking a cyclist, but cutting in sharply onto the cyclist when it meets an oncoming car.

Cyclist Paul Knightly, who sent to clip to Stayin’ Alive at 1.5, said: “If I hadn’t braked, It would have been a different story, I’m actually getting hit by the foliage on the ditch to avoid a collision, the rear wheel locked up and skidded on the mud, I was that far in.”

Also Read: You can watch the video of that near miss here 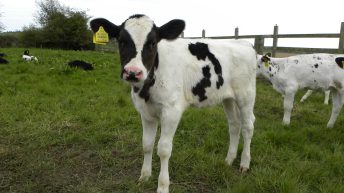 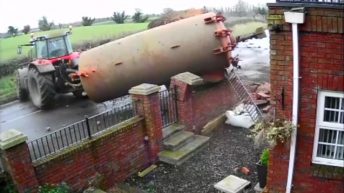