A farmer, who previously pleaded guilty to two counts under the Wildlife Act, has claimed that he shot three deer to prevent the spread of TB, the Donegal Daily reports.

Donegal farmer, Damien Whoriskey, claims he lost 13 cows due to TB and blamed the spread of the disease on deer, foxes and badgers.

In a bid to get his shooting license restored, the 30-year-old appeared at Falcarragh Court yesterday, November 17.

The Donegal Daily reports that Garda Superintendent David Kelly objected to Whoriskey, from Keeldrum, Gortahork, getting his license back.

His objections were based on the fact that Whoriskey shot three deer out of season and that he shot them from a public road.

It is understood that Whoriskey shot a deer which was about 20 yards off the road up a hill, after spending the day working with a friend at a house near Maghery Co. Donegal on March 3, 2015.

After bleeding the deer and putting it in the back of the van, the paper reports that Whoriskey and his friend were stopped by Pat Vaughan, Head Wildlife Ranger at Glenveagh National Park.

The farmer, who thought the shooting season extended into March, admitted to shooting the deer and Vaughan told Whoriskey he was seizing his rifle.

Whoriskey told the court that he was having a lot of trouble with deer coming onto his land, that they were eating his silage and it was costing him money.

The farmer claimed to have lost a total of 13 cows, which were heavily in calf and it was his belief that TB spread from wild deer and vermin that was the cause of the loss.

Meanwhile, the farmers solicitor, Patsy Gallagher, told the court that his client had no previous convictions and had undertaken a course to receive his license form a recognised dealer, according to the Donegal Daily.

The case has been adjourned until December 21, 2016 with the presiding judge suggested that the farmer wasn’t quite as innocent as he made out to be.

The paper reports that the judge said it should be reinforced to Whoriskey about the timing and conditions of the granting of a gun license and if he was then satisfied, he would be disposed to granting the application for the restoration of the gun license. 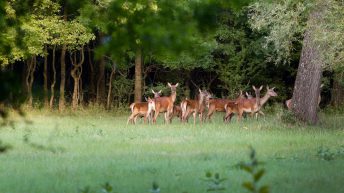