Home » Machinery » Is a new alternative to the iconic Land Rover Defender on the way?

Is a new alternative to the iconic Land Rover Defender on the way?

The founder of a large chemical company has announced plans to create 4X4 off-roader which mirrors the Land Rover Defender.

Chairman of INEOS Jim Ratcliffe believes there is a gap in the market since the Land Rover Defender ceased production last year.

INEOS has confirmed it is prepared to invest “many hundreds of millions” producing the new vehicle, while it is hoped the vehicle can be manufactured within the UK.

This is a fantastically exciting project. We want to build the world’s purest 4X4 and are aiming it at explorers, farmers and off-road enthusiasts across the globe.

“I am a great admirer of the old Land Rover Defender and have enormous respect for its off road capability.

“Our new 4X4 has been inspired by it. But whilst our off-roader might share its spirit, our new car will be a major improvement on previous models,” Ratcliffe said.

The announcement by INEOS on Monday, February 13, that it is set to go ahead and build a brand new 4X4 off-roader follows the completion of a six month feasibility study.

Whilst the company is one of the largest manufacturers in the world, it will be the first time that INEOS has produced such a vehicle.

It is hoped the vehicle will not only fill a gap in the market vacated by the Defender but also provide a step change improvement in build quality and reliability.

Manufacture of the new 4X4

Identification of a suitable manufacturing location will be a part of the next phase of the project and the company will look at UK sites as well as other European options, INEOS confirmed.

The project is to be run by Dirk Heilmann, who is now CEO of INEOS Automotive having formerly been the Head of Engineering and Technology, and he has already started recruiting a team of automotive experts.

This is an amazing project for everyone involved. Our job is to create the world’s best 4X4 and we are already moving forward with our plans”.

INEOS is determined that its new vehicle will offer a real and pure alternative to the current crop of standardised ‘jelly-mould’ SUV’s.

The last Land Rover Defender was completed in January 2016, following 68 years in production.

It was understood that time had been called on the Defender due to tough European Union emissions regulations, while the jeep also struggled to keep pace with modern safety standards due to its ‘old-fashioned’ design. 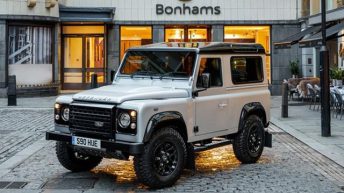 The last ever Land Rover Defender was made this week