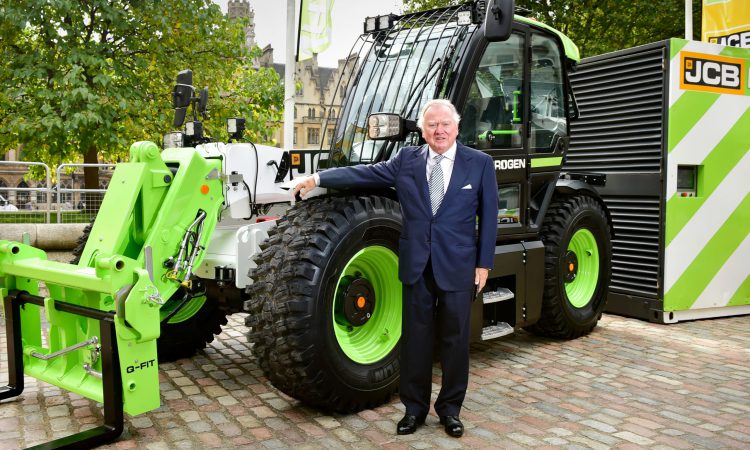 JCB is no lightweight in the off-road machinery sector, so when the company nails its colours firmly to the hydrogen power mast, then the rest of the industry will be taking note.

In a world where the expectation is that electricity will be powering anything and everything that moves, there is an elephant sitting in the room that few wish to talk about, and that is the question of storage.

Once generated electricity is difficult to keep

Despite the many advantages of electricity, there is still the problem of keeping it for future use. This is a major strength of carbon-based fuels, the energy is entrapped in a liquid that is easily transported and kept until required.

The lithium ion battery was meant to overcome this issue, but despite being around for nearly half a century, it is still a long way off matching the energy density of diesel fuel.

Batteries are not practical for equipment with high power demands, and for machines that work in remote locations, such as backhoe loaders and large excavators.

“Batteries would weigh too much, cost too much and there would not be enough time to charge them, even if on-site charging infrastructure was in place,” the company said.

There have been many proposals put forward to overcome our reliance on fossil fuels since they first came into general use.

Some of these were prompted by oil shortages or price hikes, while others are in response to environmental concerns.

Today, it is the latter above which is driving the search for another method of powering machines, which cannot be practicably connected to the grid when working.

Hydrogen is one alternative that has been talked about for some time. There are two direct ways of releasing its energy potential in a vehicle. The first is by fuel cell and the second is via direct combustion.

Of the two, fuel cells are far more efficient at yielding energy in the form of electrical current, but they have yet to catch on for various reasons.

JCB suggests that it is a question of complexity, noting that direct combustion, as it is backing, avoids the colossal expense of renewing the global fleet with electrically powered machinery, a requirement of fuel cell adoption.

Another path involves the conversion of hydrogen to a diesel substitute. Other manufacturers are believed to be considering this as a possibility for the future, and AGCO Power, for one, is creating a family of engines that can be run on a variety of fuels, which, most probably, includes straight hydrogen.

The great advantage of this approach is that it becomes a direct drop in replacement for diesel.

No new distribution infrastructure need be created and no expensive conversions, or investment in new machines, is required.

FPT is also actively developing its engines to run on alternative fuels, although up until recently, the emphasis was on natural gas.

Back in May, it joined forces with the Italian Landi Renzo Group, which is specialist in gas feed components, to explore the feasibility of pure hydrogen engines.

JCB is certainly backing up its belief in direct hydrogen combustion with a £100 million (€119 million) investment in new engines. There are, it claims, already 100 engineers working on the project and they are currently recruiting an extra 50.

Its hydrogen-powered engines are derived from its current diesel units. This ensures that the machines being sold are very similar to existing models from the engine output shaft onwards. The fuel is the only difference.

JCB is looking towards the end of 2022 for the first units to be available for sale.

There is already a hydrogen-powered prototype backhoe loader which was joined by a Loadall telescopic handler at an event in London, attended by the prime minister.

By arranging this sort of publicity, JCB is making a very clear statement as to where it believes the future lies. Lord Bamford, chairman of the company, has reinforced the commitment to hydrogen:

“Our sort of machinery will need to be powered by something other than fossil fuels.

We make machines which are powered by diesel, so we have to find a solution and we are doing something about it now.

“We are investing in hydrogen as we don’t see electric being the all-round solution, particularly not for our industry because it can only be used to power smaller machines,” he added.

Yet, there are still problems with hydrogen. The first is also one of storage and transport.

Hydrogen is the smallest molecule there is; being so small it is hard to keep contained and will easily leak from the seals and general pipework that is currently used to distribute liquid fuels.

No doubt JCB and manufacturers of hydrogen storage equipment feel that this issue can be satisfactorily addressed, but there is another snag, and that is – where is the hydrogen to be sourced?

Presently, the vast majority of hydrogen is derived from fossil fuels. Thus, hydrogen power is not a solution that is going to immedietly reduce our dependence upon them.

However, hydrogen can also be sourced from biomass or from the electrolysis of water.

Sourcing hydrogen from biomass usually entails ‘steam methane reforming’. This is an extra process that requires steam to breakdown the methane produced in a digester unit and release the hydrogen in doing so.

Every time another process is added to a system of hydrogen production, it becomes less efficient and therefore more expensive, as well as using more of the energy that we are trying to conserve.

Electrolysis is, on the face of it, the more efficient way forward. Using wind and solar power to split water may be considered the answer to storing the energy derived from wind turbines and panels during off peak periods.

The general idea may be sound, but there are problems according to the US government.

These include the expense of the process, its efficiency and the degradation of the systems components. Currently, little more than 5% of commercial hydrogen is produced by this method.

These issues are not considered insurmountable, and fluctuations of oil price and availability will alter the dynamics of the cost comparisons.

The US Department of Energy (DOE) has set a target production cost of $1/kg of hydrogen by 2030, and with it containing nearly three times as much energy per kg as diesel, then its use begins to make sense if the other problems can be surmounted.

Meanwhile, the European Union (EU) believes that hydrogen has the potential to act as a vector for renewable energy storage, alongside batteries, and transport.

Thus, it can be considered a buffer for seasonal variation in wind and solar supply, as well as production to where it is required.

The EU also recognises the problems involved in getting hydrogen fuel off the ground and into the mainstream:

Until then, JCB’s thrust into the future looks ambitious, but the company is certainly to be applauded for its attempts to break through the current log jam when it comes implementing an alternative fuel economy for off-road vehicles.