Foley said that crops got off to a very good start this year and the trend has continued right through to this week.

“The majority of the extra yield will come in the form of grain, there is potential to produce silage with a starch content of 30%.

“We seem to have the bulk, the gain potential and the early maturing capacity.

Starch is transferring very well into the grain as temperatures are 10 degrees Celsius during the day and night.

“It’s September and we are still getting relatively long daylight hours. With the week that is in it we are probably getting 0.5t/ac in extra grain yield every week,” he said.

Foley also said that crops got off to a relatively good start this spring, with most being sown between April 20 and May 10 in ideal soil conditions.

“The soil warmed up and the crops suffered no set backs,” he said.

The maize expert also said that the use of plastics is essential for growing a high yielding crop of maize, even in a year like 2016.

“When you use plastic you can use maize varieties with higher yield potential. There is no stand still with plastic covered crops, they just take off when they get to June 1,” he said.

The importance of good preservation

Despite the positive outlook on maize yields, Pioneer’s Andrew Strainthorpe said farmers should wait until crops are fully mature before harvesting to allow the crop to reach its maximum grain fill.

The Business Manager with the maize breeding company said farmers should also take extra care to ensure that they preserve their maize silage crops properly.

“When growers grow a good crop of maize they need to ensure that they chop, conceal, cover and ferment it properly.

“You have a silage that is worth a lot of money and you don’t want it wasting in the pit. There is really no reason why farmers should have mould silage,” he said. 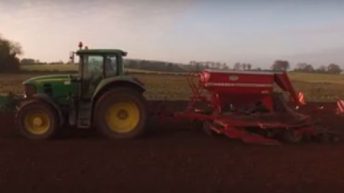 Video: Harvesting maize to sowing winter corn in a matter of minutes