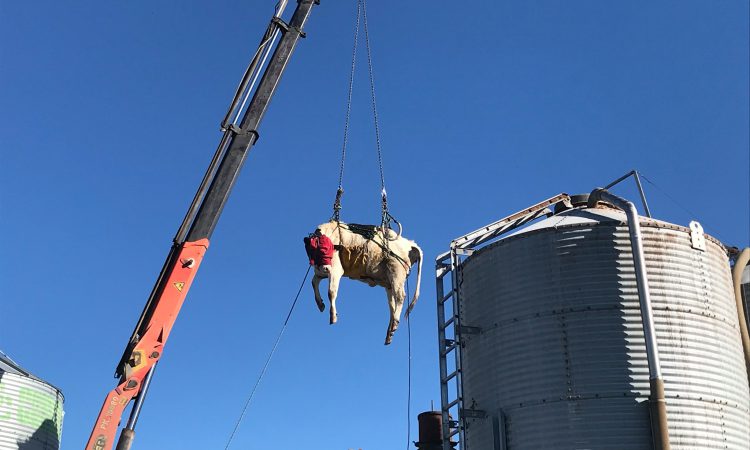 A crane had to be brought in to rescue a trapped cow from the centre of a rotary milking parlour in New Zealand (NZ) this week.

The cow got stuck in the middle of the rotary setup in the Canterbury region of New Zealand yesterday (Wednesday, August 4), local fire crews confirmed.

In a brief statement on the successful rescue mission, Fire and Emergency NZ’s Canterbury division said:

Our crews from Dunsandel and Burnham were called this morning to assist a farmer and a vet to remove this cow from the centre of the milking platform.

“To complete this complex rescue the crews had to remove the iron sheeting from the shed roof, while the vet sedated the cow and they then used a Hiab [crane] to lift her over and out back onto the soft paddock she was meant to be in.”

“The cow is now resting up while she recovers from her little adventure,” the statement continued.

“We hope she is up and moving about soon,” the Fire and Emergency NZ statement concluded.

A similar incident occurred in the UK last year when firefighters were called to help rescue a 1,000kg bull which was stuck in a ditch in Hatfield Broad Oak, in the county of Essex.

Thankfully, the bull seemed fine once he got out and “started happily eating grass” even before all the straps had been taken off him, the crew said at the time.