The Case IH Optum 300 CVX has been voted the international ‘Tractor of the Year’ for 2017, from a shortlist of seven tractors.

The Case IH tractor beat off competition from other manufacturers such as Fendt, Massey Ferguson, Deutz-Fahr and Zetor.

With a rated engine power of 300 horsepower, the Case IH Optum 300 CVX can reach close to 315 horsepower thanks to a boost.

The awards, which have been held annually since 1998, were announced at the EIMA International Agricultural Exhibition in Bologna, Italy.

The seven models in the ‘Tractor of the Year’ category were:

This award recognises the advancements in tractor technology and design achieved by Case IH, according to the Case IH High-hp Tractor Product Marketing Manager for Europe, Middle East and Africa Dan Stuart.

“We have created a totally new, strong yet lighter weight design, with new strong front axle and structural engine oil sump design, to meet demands for customer requiring a 250-300hp tractor with a high power-to-weight ratio in a compact, manoeuvrable layout.”

That means it’s well-suited to tasks where high power is essential but weight less so – such as working with large mowers, for example, where it’s important to protect the sward.

“But for jobs where traction and grip are the critical factor, such as heavy cultivations, Optum CVX can be weighted to make it as capable as any ordinary tractor of this power.

“And for road transport, the Optum can be ballasted according to the weight of the load it is pulling, for maximum safety and fuel efficiency,” he said.

Meanwhile, this was the first occasion in the 70 year history of Zetor that one of its models made it into the final shortlist.

The international award is decided by an independent jury of 25 specialist agricultural equipment journalists, from 23 European countries, including Ireland.

In the ‘Best Utility’ category, which includes tractors over 70 horsepower with a maximum of four cylinders, New Holland’s T5.120 model took home the award.

The ‘Best of Specialised’ category which includes orchard, vineyard, hill and mountain tractors, saw the Antonio Carraro Tony 9800 TR claim the prize for 2017.

An overall award for ‘Best Design’ was picked from all the tractors nominated in the other categories, with the Deutz-Fahr 6215 RCshift chosen as the winner. 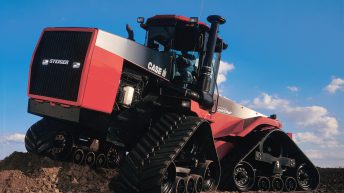