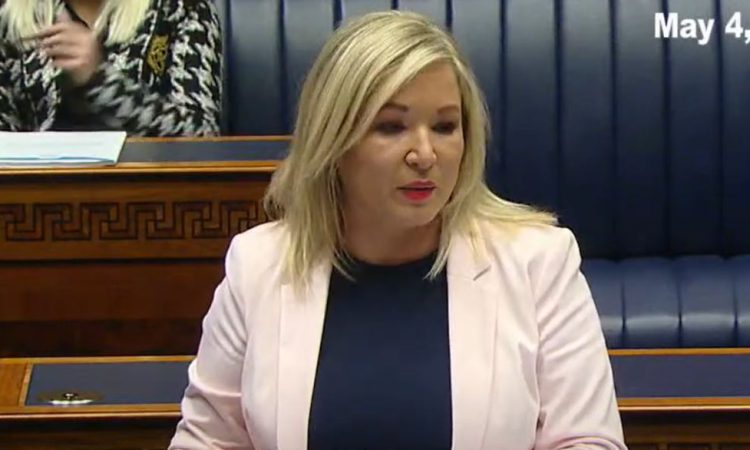 Any decision on a veterinary zone solution to problems with the Northern Ireland Protocol will have to be made at Westminster, not Stormont, the Deputy First Minister Michelle O’Neill has cautioned.

It comes as frustration over the restrictions and additional checks comes to a head and officials warn the number of checks to be carried out is unsustainable.

Speaking during Minister’s Questions on Tuesday evening (May 4), Michelle O’Neill said she and First Minister Arlene Foster were “committed to working together” to achieve the best possible outcome for local businesses in the region.

“As an Executive, we regularly review the impacts arising from the end of the transition period and continue to raise concerns with the Westminster Government and the EU on many issues, including those relating to sanitary and phytosanitary (SPS) checks,” she said.

“Any decision on veterinary arrangements for goods checks is the responsibility of the British Government. In seeking the best possible outcomes for our citizens and for traders; however, we have continued to highlight to Whitehall and the EU the impact that those issues are having on our businesses.

“We have been clear that any solutions to them need to reflect the practical impacts and should be developed in liaison with our business community, which has continued to stress that solutions need to be simple, practical and affordable.”

The Northern Ireland Protocol was introduced in January to ease the paradox of Northern Ireland remaining part of the European Single Market while also retaining access to the UK’s internal market.

However, while the agreement allows goods to leave Northern Ireland for Britain, it has meant checks and restrictions apply for goods from Britain entering the region. The biggest stumbling blocks of the NI Protocol relate to livestock movements and sanitary and phytosanitary (SPS) goods such as seed potatoes and horticultural produce.

On Tuesday it emerged the region’s Agriculture Minister Edwin Poots was planning on seeking a Judicial Review over its implementation.

Poots alleged that the agreement was not supported by any unionist party in Northern Ireland and runs contrary to the 1998 Good Friday Agreement.