The dairy farming sector in Northern Ireland has continued to reduce its carbon footprint, a report relating to greenhouse gas emissions has found.

The statistical report was recently released by the Department of Agriculture, Environment and Rural Affairs (DAERA).

It presents findings from a carbon footprint time series study that was undertaken for Northern Ireland’s dairy farm sector.

Carbon footprints, as shown in the report, refer to greenhouse gas (GHG) emissions per unit of product, which allowed assessments at that level to be carried out.

Key Points from the Report

The study shows that from 1990 to 2014, the agriculture sector has made relatively modest progress in reducing total GHG emissions, a reduction of 5.2%.

But dairy farming has made significant progress in reducing its emissions on a per unit of production basis, a reduction of 30.7% since 1990, figures show.

Advertisement
The reason for this improvement is that Northern Ireland has experienced continual growth in its total milk production over the period, an increase of 67%, according to the report.

This increase was driven primarily through increases in milk yield per cow, while the growth has also spread the emissions burden associated with each dairy cow over a greater volume of production, DAERA says.

The report shows that the main factor causing variation in carbon footprint between individual dairy farms was milk yield per cow.

Milk yield per cow was found to have an inverse relationship with carbon footprint levels, because if yield per cow increases then GHG emissions per litre will fall.

The reasoning for this is that as the number of dairy replacements increases, their associated emissions have to be spread over the milk produced, the DAERA report shows.

From a GHG perspective, the report highlights the importance of minimising replacement rates and meeting target calving ages.

Other factors, which were unmeasured in this study, that will influence carbon footprint levels via their impact on milk yields and herd replacement rates include land quality, management capabilities and genetic potential of the herd. 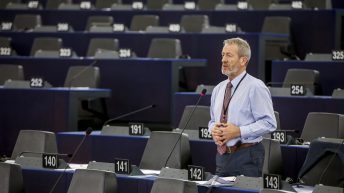